History of the Nursery

The Coolum Community Native Nursery was established in November 2005 to grow coastal native and salt tolerant plant species. Due to the early success and growth of the nursery, a new purpose-built facility was constructed adjacent to the (then) Hyatt Regency golf course and opened to the public in early 2008. (further details below photos) 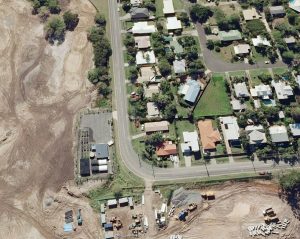 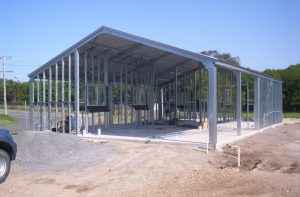 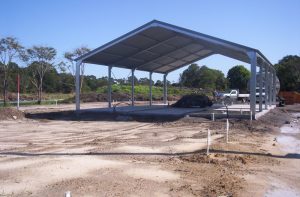 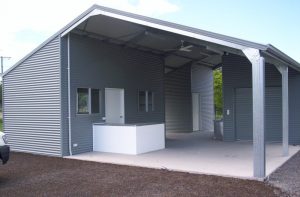 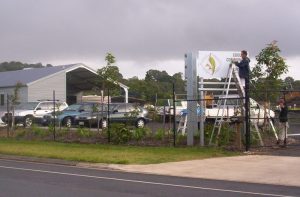 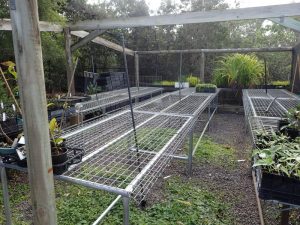 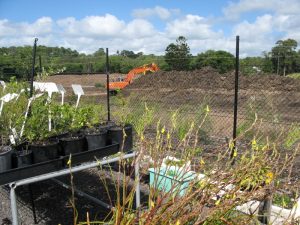 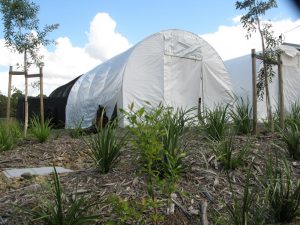 After a bush fire decimated dunal vegetation from Stumers Creek to Coolum, members of Coolum Coast Care (initiated by Leigh Warneminde, Deb Voss and Janette Wallis) decided to plant 2000 trees to celebrate the new millennium. Since no local native seedlings were available, they had to be sourced from the Bunya Mountains via Barung Nursery in Maleny. Realising the need for coastal produced native plants, it was clear that a seaside native plant nursery was required.

Deb Voss worked tirelessly to make the nursery a reality. In 2001 seeds were propagated at the Coolum State Primary School for seedlings to plant in the dunes. Leigh Warneminde, Janette Wallis and Deb Voss supervised the Environment Club’s initiatives. Coolum Coast Care informed Bruce Dunne, elected Maroochy Shire Counsellor of the nursery need and asked him to help identify a suitable site on Council land.

In a separate development from 2003 to 2005, Lend Lease negotiated a development application with Council (with many objections by community groups) to remove bushland near Warran Road to make golf fairways in a swap with the existing golf holes which would be converted to a seaside housing subdivision.

On 13th July, 2005 Council agreed to the Lend Lease development application adding the legal condition that Lend Lease build and ensure viability for twenty five years of the Coolum Community Native Nursery. This obligation was taken over by Sekisui House in 2014 when they purchased the land from Lend Lease.

In November 2005, the Coolum Community Native Nursery commenced activities as a not-for-profit community centre to grow and promote coastal natives especially salt tolerant plants.  Ideal for the Sunshine Coast, these plants require less water, fertiliser and maintenance than exotic plants or plants from other parts of Australia. In addition they provide valuable food and habitat for local wildlife while showcasing the unique character of the Sunshine Coast.

The current Nursery facilities were opened to the public in 2008.  Prior to this from November 2005, under the guidance of Nursery Manager Gabe McGhee, with assistance from Green Corps nursery trainees and volunteers, plant materials and routines were established at an unused nursery of the Hyatt Hotel (now Palmers Resort.)

The nursery prides itself on the sourcing and weekly collecting of naturally occurring (wild) seed and cuttings. With a stock list of about 150 species, on average, there are 140,000 plants for sale to the public, to contractors and to government. Staff and volunteers provide friendly practical advice on plant selection, care and potential problems.

The nursery engages one full time and one part time paid staff supported by 40-50 volunteers of all ages providing over 500 hours per month (For example in 2016 a total of 6,035 volunteer hours were logged). The nursery helpers propagate and collect seeds as well as assist with office admin, sales, weeding, pot recycling and giving advice to customers who are residents, landscapers, council workers. From time to time interns have been placed at the Nursery for ongoing training and experience.

In March 2011, after more than 18 months of improvements, Coolum Community Native Nursery attained NIASA (Nursery Industry Accreditation Scheme Australia) Accreditation.  Several on-site visits and audits by NGIQ – Nursery & Garden Industry Queensland – have led to this milestone for the Community Nursery.  Fortunately, being a young nursery facility (built in 2007), many design aspects were correctly put in place from day one by the engineers and design consultants of the nursery grounds, including drainage, all-steel benches, rainwater harvest, solar orientation, airflow aspects, and sealed carparking.

The Coolum Community Native Nursery is a thriving community nursery that all locals can be proud of.

(This page is a work in progress)